After every trip I'm confronted with the same old problem.  I've got the tendency not to like my own pictures too much, at least not straight away. It takes some time before I fully appreciate them, similar to a song that you've got to listen to a couple of times before it really gets to you.
Obviously,  the opposite thing happens as well. Sometimes a picture will look great on the back of your camera, but later -uploaded on your computer- you'll wonder why you ever liked it in the first place.
What happens is that -(sub)consciously- I start to analyze my images, trying to figure out why I (dis)like them. Sometimes, however, analyzing turns into over-analyzing and an image that I liked on first sight will start to reveal some of it flaws. The "love on first sight" is over, the woman/man of your dreams -if you prefer the metaphor-isn't quite as perfect as you thought initially.  It will look imbalanced, incorrectly exposed, the composition might be slightly off...
Or I start to wonder why I didn't shoot it at a completely different focal length or composition.

In the particular case that I wanted to talk about today, the issue was even harder because there were two of them, with basically the same composition but, at the same time, they couldn't be more different. And as you know, in the end -keeping the metaphor alive- you can only choose one.
Here are the 2 trouble causers: 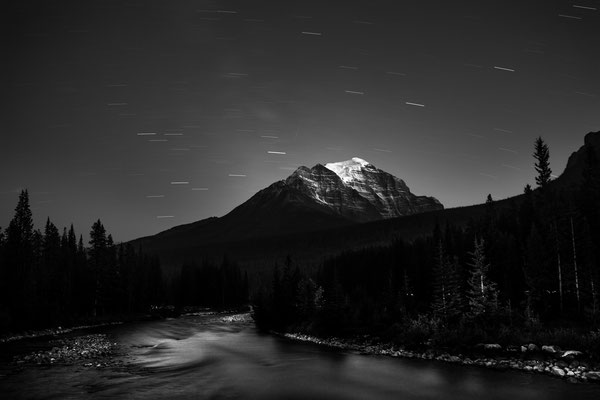 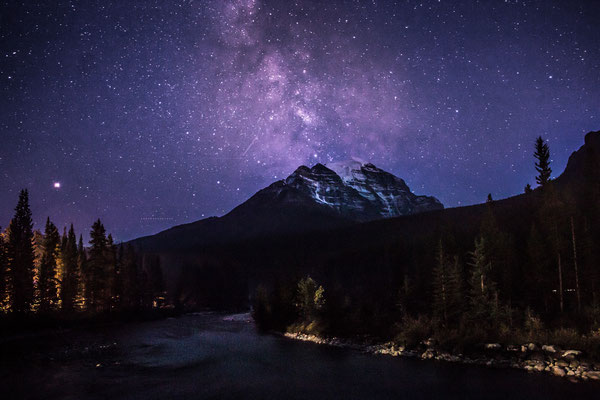 To get straight to the point: neither of them are the way I wanted them to be.
The star trails in the first image aren't as long and bright as I would have wanted them to be. But to be fair, that's my own lazy ass' fault. I was tired and it was freezing, but if I'd taken my time to calculate the correct exposure time, instead of guessing it, the image would have probably looked better.
The second image is too grainy for my liking. That's not really my own fault though. A slower shutter speed would have allowed me to bring down my ISO, but would have introduced motion blur in the stars. In most cases stars seem to stand still for 15 -20 seconds, more than that and they will have definitely moved. So I needed the higher ISO to keep my shutter speed fast enough and had to obey to the limits of my camera.
However, I love how clean and sharp the first image is. Furthermore the river has caught way more moonlight in that 15 minute exposure than it did in the second image (15s exposure), which brings a lot more overall contrast and balance to the image.

And as much as I dislike the amount of grain in the second image, it's probably thanks to that noise that the sky looks as colorful and filled with stars as it does.
Which doesn't mean that if I ever got the money to invest in a proper full-frame camera (that would allow me to get an image like this almost noise-free), I wouldn't do it.
In the end I only posted the first image here on my website (up until now), because I realized that the "technical quality" of that one is better, it's cleaner and better balanced.
However I've noticed that most people seem to prefer the second one, because the 'wow-factor' seems to be bigger.
I still haven't really made up my mind.

So the moral of this this story?
As the philosopher Jagger once said: "You can't always get what you want".