This one is going to be pure photography talk using one single image as an example. As some of you know most photographers don't shoot jpeg-files, but raw-files. The details don't really matter but essentially these raw-files are bigger because they contain more data which allows the photographer to make more and finer adjustments after the picture is taken, generally given you more control over how the picture will look. The downsides of a raw-file are that they tend to lack contrast and color. If you shoot jpeg, in-camera processing adds this contrast back into your picture. The camera won't just process the image to add  contrast, it will also add blacks, brightness, noise reduction and sharpening.
A couple of days ago a friend, who had been waiting for me to send him some pictures of our trip, asked me: "Just send me the raw-files!?".
As much as I'd sometimes like to save the time by not having to process the images, that's simply not an option. Often the raw-file comes out OK, but not exactly the way you'd want it to look... often it doesn't even remotely look like the image you had in mind.
To further clarify this I'll use the image below as an example.

The image above was shot at 1/320, f5.6, iso 320 at 194mm focal length. Since I was handholding the camera and shooting at a fairly big distance, I couldn't shoot at iso 100 since this would have forced me to use a longer shutterspeed. To be fair, the quality of this image isn't great. I shot it using the kit-telelens canon provides (55-250mm). It's a fine lens considering it's price but it lacks sharpness and the diafragma is pretty small. In practice this means that the photoisn't too sharp and that the bokeh in the foreground looks pretty awefull.
Anyway,enough ranting and wishing for better equipment, I do like this shot. It has some nice deep colours in the trees and great contrast because the sunlight only hit part of the scene, creating a nice, cosy -almost fairylike- scene.

The image above is the final edit. The one below is the raw file.... Flat, grey, underexposed and just plain boring. But exactly the way I 'wanted' it to look like straight out the camera.

The fact that the image is underexposed was done intentionally. I need the faster shutterspeed to get a sharp image and I knew that (because I had all the data and not just a compressed file) I'd be able to 'save' it in post. All the other things I mentioned are just a side effect of shooting the image raw. It might look like it needs a ton of editing to get to the final version, but I'm going to try to prove otherwise.
The biggest issue is the lack of contrast and the overall exposure that's too low. So a simple way to fix this is to adjust the tone curve. 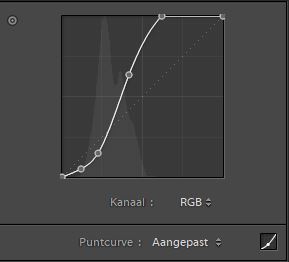 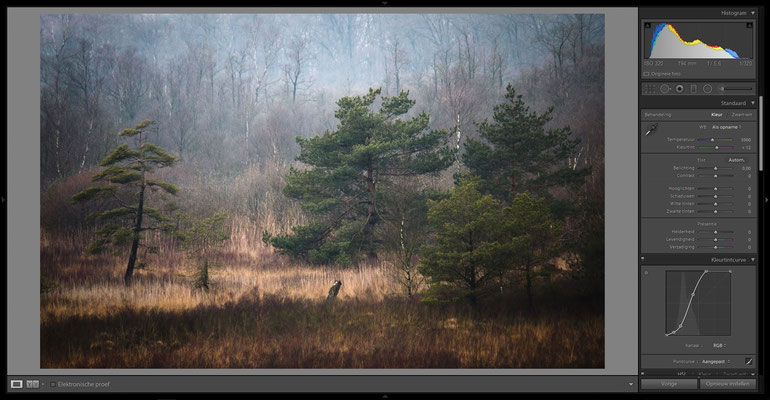 Basically I added some points on the curve which I dragged up and down. Since I wanted to darken the shadows, I lowered the curve on the left. To increase the highlights I raised the curve on the right. Because I raised the center of the curve as well I was able to fix the exposure.
You can immediately tell that the image is more in balance and better exposed by looking at the histogram in the top right. This is just one way to correct the image, I could have played around with the shadow- and highlight-sliders above the tone curve as well. Or I could have used the basic contrast-slider. The disadvantage of this slider is that you don't have as much control.
I could have stopped right here, but I felt like I missed some colours in the image. I decided to bump up the vibrance (+24) and the clarity (+21) a little.
The final issue was the fact that the haze seemed to influence the highlights too much, which lead the eye to the top of the image instead of the center.
The haze was a side effect of the fact that I was shooting from a fair distance away, introducing a nice blue color cast to the top of the image.
I could have simply lowered the highlights, but this would have affected the center of the image as well. So I decided to simply lower the luminance of all blues present in the picture. 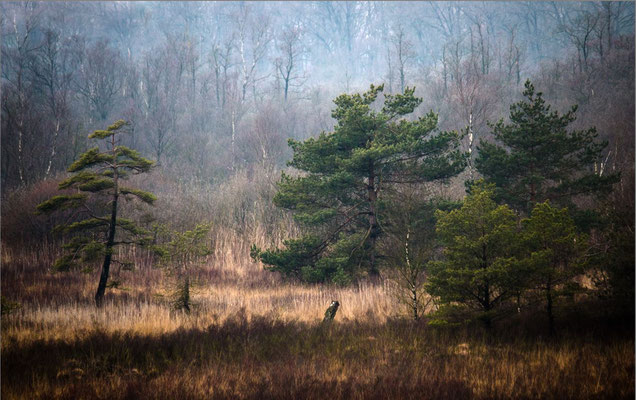 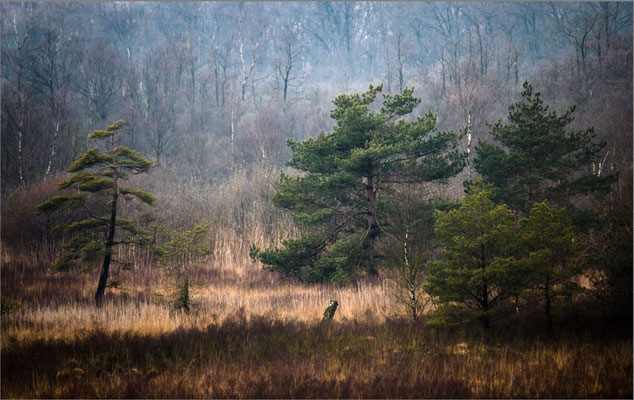 Before decreasing the luminance in the blues.

To be fair, I can't recall whether or not, in reality, the highlights were the way they look like in the final image. Anyway, I still think I kept the image 'untouched' enough and didn't overdo the edit. Or did I?