I guess I couldn't hold this one off much longer, so here it is: a blog about parkour photography, or at least my way of doing it.

If you expect a technical guide in which I go over my preferred settings, locations and gear for parkour photography, I'll have to disappoint you!

As most of you know me -and my passion for parkour- it probably comes as no surprise that these two fields of interest overlap.
But to be fair, it's not that straightforward, at least not to me.
Most of my photography (street, travel or landscape) has been (and still is) what  is called 'candid' photography. These are the kinds of photography the introvert in me tended to like.
In traditional landscape photography there's no need for a human subject at all. Usually, when you're out in nature, there aren't too many people around either, so it's pretty straightforward not to include them in your shots.
In travel or street photography you kind of prefer to have some people in your shot. But the issue is that you have little or no control over the scene.
If you want different light you have to wait for the sun to move or the streetlights to turn on.
If you want a human subject in your frame, you have to wait until someone moves into the right position.
Usually, however, I don't wait, I try to react quickly and anticipate on the shot.

There are photographers who like to 'fish' for their subjects, I don't tend to have the time (or, let's face it, patience) for that.

But the past year or so my 'attitude' has slightly changed, I still prefer candid shots but I also have come to realize that a shot quickly becomes more interesting with a clear, well-positioned subject in it.
So instead of waiting, or giving up on a shot, I'll simply ask someone (I'm using the word 'someone' to indicate that it often doesn't really matter who is in the frame, while I should be using the words ' my girlfriend', because in reality she's the one who has to deal with "Could you please stand on that exact spot" most of the time) to go and stand or sit somewhere, to act as a subject.
To be fair, I've always known this, and I often think that this change in attitude towards candid shots, or better the negation of my own principles has something to do with the constant pressure of having to put out 'quality' (=likeable) images.
(Damn you Instagram.)

Anyway, I don't want to be a hypocrite, this change in attitude did help me in getting better parkour shots.
Before, if I'd have seen someone do a jump and if I hadn't been able to grab and frame my camera in time, that simply would have been bad luck.  Because I wouldn't ask someone to do a jump again, simply because the mere act of asking someone to do something, results in a staged photo. Something I used to despise.
However, nowadays I'll not only ask someone to do a particular jump again, I'll even ask him/her to slightly change the move/ direction/ location to get a better shot.
Or even worse, I'll ask people to do jumps they probably would never do if I wouldn't ask them.

Some might say: "Well yeah, sure, if that is what's needed for a better image, then why not?"
But for me it felt like cheating, as if I was creating a new reality instead of capturing the 'actual' one.


Let's take the image below as an example of an occasion where I almost felt ashamed for shooting it.
When I was observing the location I liked the contrasty shadows, the mixture of diagonal lines and I knew (felt) where it would make sense to put a subject. But both Niels and I knew the laché precision (swinging, while holding on to the ledge, letting go and landing on the wall) wasn't possible, but still I made him hang there and initiate the swing a couple of times so his body would form a nice diagonal crossing the frame.

The reality of things is that the quality of an image usually depends a great deal on its composition, in which the placement of your subject of interest is of utmost importance.
And guess what, the chances of you getting the ideal composition without actually 'composing' the shot are minimal.

Unless you, as a photographer, are able to - in a couple milliseconds- make sure that:

You can't and, unless you're the religious type, you shouldn't be spraying and praying.

But let's get back to my 'I don't want to create a fake reality'-issues. I needed to convince myself that even though I asked Niels to do something he wouldn't normally do, the move could potentially be used in a different context, in which it would make sense to actually do it.
If we'd consider the set of all possible parkour lines in this location, one of them would surely include that specific laché type of movement.

And what's even better, the best positions in the frame usually are kind of challenging to reach. And what could be more 'parkour' than challenging yourself to do something you're uncomfortable with.

Btw: If you want to, go and check out the rest of my b&w parkour serie. 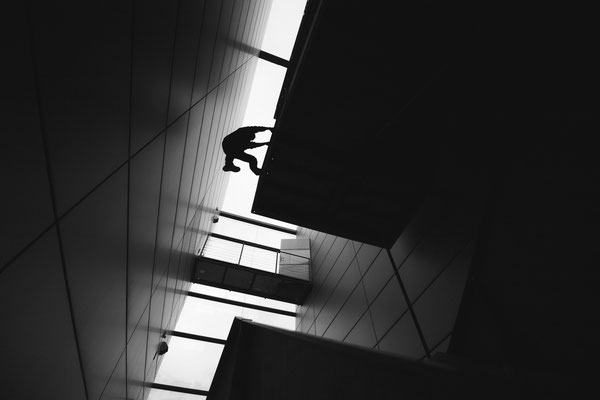 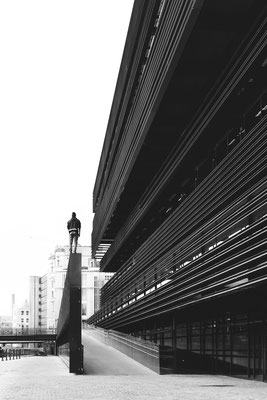 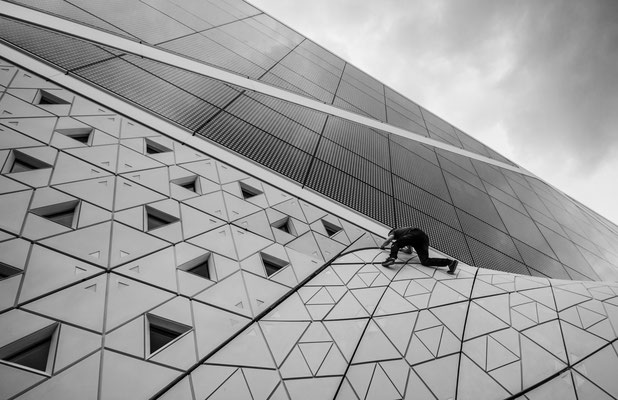 Some shots which wouldn't have happened if I hadn't 'challenged' Niels with my photo ideas.